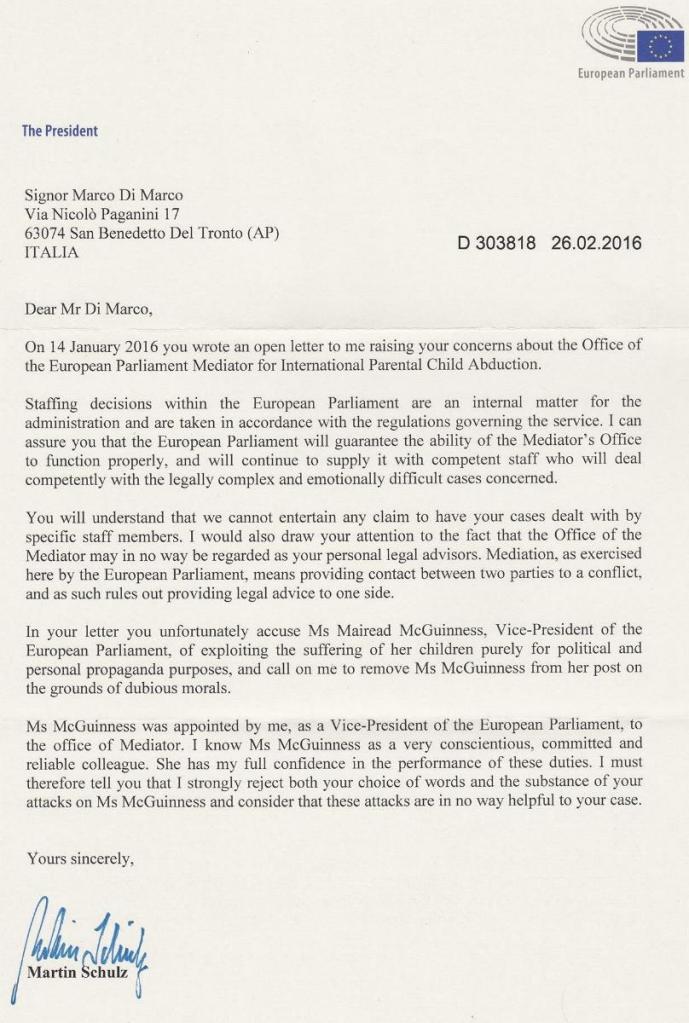 Thank you for your answer to our complaint about the Mediator of the European Parliament for cases of international child abductions. We take knowledge of your position. Nevertheless, We are concerned to clarify the following:

· We noticed that you addressed your letter only to Mr Marco Di Marco, while the letter was addressed to you by multiple parents, all signatories of the letter thereof.

· We never considered the Office of the Mediator as “our personal legal advisor”, WE never even thought at a public service in these terms, as you inexplicably suggest in your letter. Precisely, the Mediator’s Office is, it should be, and it has always been, before Ms McGuinness arrival, a public service helping children in the dramatic situation of a parental child abduction trough the assistance of legally qualified civil servants, according to what it is stated by your own web site.

· Of course, We don’t pretend to choose a specific “staff member”as legal advisor, as you suggest, but we claim, the least, that the European Parliament should guarantee the continuity of such a sensitive service, in the superior interest of our children and to defend such major interests against the arbitrarious and unwarrented decision of the same Mediator, that caused serious prejudice to the stage of development of our procedures, removing Ms Mangiante, without notice and nor ensuring a valuable alternative. The question we ask you is : based on which service’s interest this decision has been taken? Because who payed the consequences of that are our children!

· We trust you understand that the nature of our complaint is not “personal”.We were equally happy with Mr Pasquale Ciuffreda and other servants that preceded him, as well as with Ms Angelilli, but we are definetly not happy with Ms McGuinness “management” of the Office and absolutely not happy with Ms Irene Hennigan, clearly uncapable to take care of our legal cases whatsoever ( as proved by her poor assistance). You might be interested to know that WE didn’t receive any assistance since Ms Mangiante left the Office and this is scandalous!How do you explain that?

· You “assure” ,in your letter, that the Mediator’s Office will continue to “supply it with competent staff”. Therefore, why a competent staff member has been removed?The EP removes the good official under MEP’s whims?How do you guarantee, on this basis, the quality of a service dealing with children?By reason of trasparency We would like to ask you the qualifications and legitimation to work in such service of Irene Hennighan(currently managing the Office), (as we know for Mr Ciuffreda, Ms Kleim and Ms Mangiante), because we have reasons to suspect that Ms Hennigan doesn‘ t have any!

· If you want to place your “friends” at the EP, please don’t do that in a service that deals with CHILDREN! Are you aware of the sensitiveness of the interests involved? Is that too much to ask for the most basic guarantees?

· For many citizens involved with such dramatic situations, the Mediator’s Office is a fundamental service, as , basically, offered legal advises and guidance for free, being a public service. Not everyone can afford to pay private lawyers. With Ms Mcguinness it is not the case anymore and apparently You, President of the European Parliament, are fine with that. The applicants themselves address to you to witness a scandalous situation concerning an EP service, and you, President of the European Parliament, defend your colleague and not the INSTITUTION you represent, nor the rights of our children.

· Who better then US know either or not Ms McGuinness is a “committed, councious and helpful “Mediator? Which is our interest in making a complaint against her if she were “conciuous” as you say in your letter, and committed? Why do you ignore our witness?

· The European Parliament is by definition the physical place where the “elected representatives” are called to act in the common interest of the citizens they have been invested to represent trough our votes!. Nevertheless, by your reply , it appears that you are more concerned by defending your colleague reputation, despite her objective scandalous behaviour, instead then taking awarness and action in the interest of an EP service that involves CHILDREN, our children, EUROPEAN children.